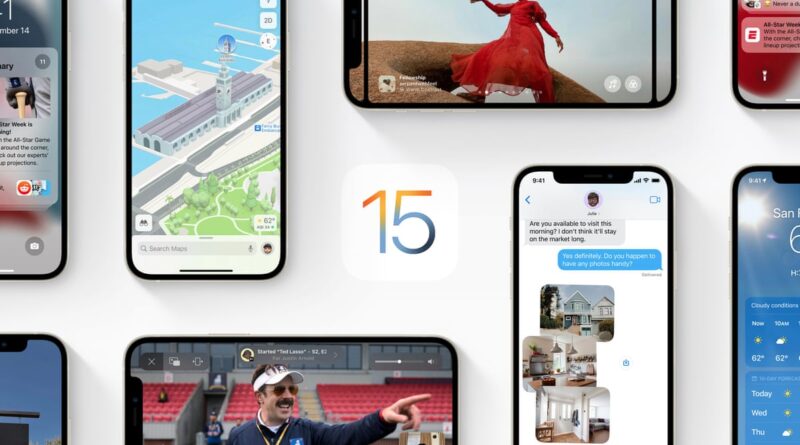 Apple has released iOS 15, the latest version of its mobile operating system. Whether you’re still using an old iPhone 7 or upgrading to a brand-new iPhone 13, the software update will deliver a slew of new features and adjustments to the vast majority of iPhone customers.

Everything you need to know about iOS 15 is right here.

When will iOS 15 be released?

When iOS 15 comes on September 20, 2021, you’ll be able to download it if you have an eligible iPhone model. The public beta has been available since July, and we’ve already given it a thorough review.

Which devices will be updated to iOS 15?

The new Apple iPhone 13 models will come with iOS 15, but the update will also benefit hundreds of millions of iPhone customers with older handsets. Apple is delivering iOS 15 for all iPhone models, including the iPhone 6S, iPhone 6 Plus, and iPhone SE, making these the iPhone devices with the longest support history. iPads will receive iPadOS 15, which will be available for a variety of devices, including the iPad Air 2, iPad Mini 4, iPad (5th generation), iPad Pro 9.7, and the upcoming iPad Mini 6 and 10.2-inch iPad.

What new features does iOS 15 include?

iOS 15 comes with a slew of new features and enhancements. Here are a handful of the most interesting ones to keep an eye on once you’ve updated:

This upgrade should make your life a little easier if you’re the type to ignore notifications or let them pile up.

Your notifications will be compiled into a new Notification Summary on the lock screen for a cleaner look. You don’t have to be concerned about missing anything. The summary separates and prioritizes alerts based on on-device knowledge about what you interact with the most, so important notifications like messages don’t get lost among app reminders.

The Notification Summary is now even better thanks to the new Focus function. Work, Personal, Sleep, and Do Not Disturb modes are available, allowing iOS 15 to prioritize alerts based on your current situation. You may now see notifications in Focus mode thanks to new widgets for the home screen. It can even be tied to a specific location, and after you’ve set your status, it’ll be applied to all of your connected Apple devices. Larger app icons and clearer wording are used throughout the notification system in iOS 15 to make it simpler to see what’s new and important.

Apple recognizes the importance of video calls and messaging in today’s world, and it has unveiled a slew of new FaceTime and Messages features centered around SharePlay.

Listening, watching, and sharing with friends and family are all part of SharePlay. During a FaceTime call, for example, you can just press play in Apple Music and listen to a song together, with everything synced up straight away. Anyone on the line can play or pause the music, providing everyone in the room with complete control over the entertainment.

This also works with video, which can be simultaneously broadcast to an Apple TV while maintaining in sync for callers. Apple’s SharePlay API will bring SharePlay to a variety of apps, including Disney+, Hulu, HBO Max, Twitch, and TikTok. It’s also possible to share the screen of your iPhone with other persons in a conversation, allowing everyone to explore the web or even provide instructions on how to alter a setting.

Shared With You allows you to send articles, songs, and photographs to pals as a message from anywhere on the iPhone, including Photos, News, and Podcasts. Images incorporate shared photos from friends who have added you to their iCloud friends and family list, and iOS 15 sorts and organize photos that contain you. This type of news gets prioritized at the top of your list, and you receive reminders about who provided you the story.

The iPhone’s camera now has a text-scanning feature, which Apple has supercharged. Live Text extracts text from photographs and works with screenshots and internet photos as well. When you take a photo, it recognizes text that you can copy and paste into an email or text message, or you may search online using text from an existing photo. It can also recognize phone numbers that can be dialed directly from the image.

The new iOS 15 makes advantage of on-device intelligence to examine photographs more closely. Visual Lookup allows you to look up information on art, books, nature, and places from a photo. Spotlight now searches for photographs based on language, a person’s name, or even elements in a photo, among other things. You don’t even need to look for someone you know because Spotlight detects actors and other well-known people.

Memories in iOS 15 now include Apple Music, allowing you to create more engaging, personalized collages of photographs and videos depending on your activity. Apple Music music tailored to your tastes and relevant to the setting is now used to create these brief performances. All of the images are synced to the beat.

You may modify them even further by using Memory Mixes to adjust the tempo, music, and even the aesthetic by applying various filters. Furthermore, iOS 15 continues to study Memory and offers additional song recommendations according to your particular preferences.

The first personal identity document kept in Apple Wallet will be your driver’s license, which will be encrypted and stored in the iPhone’s secure region. The Transportation Security Administration is expected to accept the digital ID soon, according to Apple, and when you share it, a list of what will be viewed is displayed. Apple did not say when this functionality would be accessible or whether it would be available outside of the United States.

Apple Wallet will soon store digital hotel keys in addition to credit cards, work IDs, and driver’s licenses. If your hotel provides digital keys, you can bypass the front desk and go straight to your room. World of Hyatt is the first hotel to collaborate with Apple.

Maps will soon be available in Spain and Portugal, followed by Italy and Australia before the end of the year. Before the end of the year, it will also add augmented reality (AR) perspective to a number of cities, although that upgrade will only be available on iPhone models with A12 Bionic or newer hardware. In 2018, the A12 Bionic was first seen in the iPhone XR, iPhone XS, and iPhone XS Max.

Walking instructions will be supported in cities having AR. Users will utilize the Camera app to scan their surroundings in order to use walking guidance. After determining your location, Maps will send walking directions to the camera app.

An interactive world overview will be available in the new Maps. There are several new features, such as custom-designed landmark icons, distances, elevation, and a night mode with a moonlight appearance.

Finer details on the map, such as bus lanes, crosswalks, bike lanes, and enhanced help for complex junctions and turn lanes, have been added to driving directions in iOS 15. These modifications will be rolled out to CarPlay later this year, starting with Maps on iOS. Maps will follow you on your transport route and alert you when it’s time to get off

What are the new features in iOS 15?

In iOS 15, there are further changes, new widgets, and language support. Other popular apps that are getting upgrades include:

You’ll be able to FaceTime everyone, including those with Windows and Google phones, in the near future. You’ll be able to arrange FaceTime conversations ahead of time (which will sync with the Calendar app) or invite folks to FaceTime calls right away by sending them a link that they can access in Edge or Chrome. You can utilize the new Grid view to see all of your pals in the same-size tiles once they’ve joined the call.

Tab Groups are a new feature in Apple iOS 15 that sync across devices. You can make as many groups as you want, such as Recipes for weekly meal planning. You won’t have to scroll past those tabs if you don’t need to see them. Swiping left or right on the new tab bar at the bottom of the browser will switch between tabs.

A few changes have been made to the Health app as well. Information from your Apple Watch, immunization records and lab results will all be stored in the app. You can share health information with family members or medical facilities, and it’s simple to identify who has access to what.

2 thoughts on “Apple iOS 15 Released, Everything You Need To Know!!!”