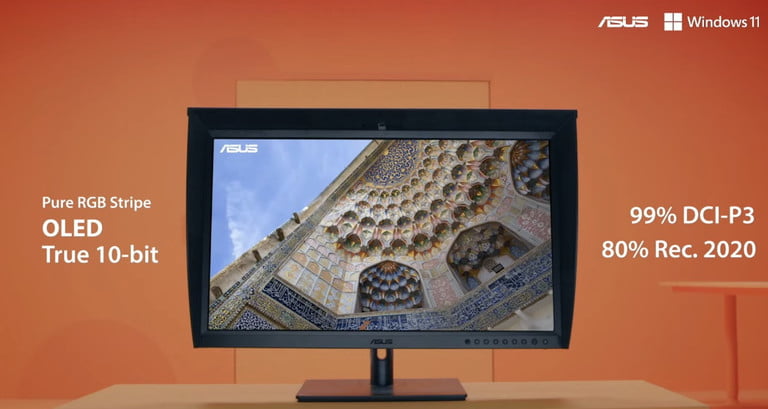 Asus announced new display solutions and peripherals at its Create the Uncreated event to assist creators in working on and showcasing their creations. The company demonstrated a new 1080p LED projector as well as a new color-accurate and factory-calibrated OLED PA32DC monitor.

Asus noted of their ProArt OLED PA32DC display, “This model is the result of direct feedback from professionals.” “They wanted a large OLED display with amazing color accuracy, vast gamut coverage, and a flexible design that could be used in the studio as well as for onset monitoring,” says the company.

The 31.5-inch monitor has a 4K resolution and pure RGB OLED pixels that support 10-bit color and cover 99 percent of the DCI-P3 color space, as well as 80 percent of the Rec. 2020 standards. According to Asus, using the monitor on a desk is “more pleasant” than watching TV.

“When it comes to HDR, the PA32DC exceeds all LED televisions by achieving full-screen luminance of 250 nits endlessly and peaks far above 400 nits,” according to the firm.

It’s built as a reference monitor that’s factory-calibrated out of the box and comes with a colorimeter that pops out from the top of the display for on-demand and scheduled screen calibration. The colorimeter replaces the webcam in this proposal, which is similar to certain consumer displays with a pop-up webcam.

“To assist maintain color accuracy, we execute comprehensive factory calibrations to achieve an out-of-the-box delta E of less than one in sRGB and AdobeRGB, and a delta E of fewer than two in DCI-P3,” Asus claimed. The monitor has a built-in grip on the rear, interchangeable industrial feet for secure positioning in the field or on set for filming and a desk mounting stand.

It also has a cowl to reduce glare and reflections, as well as rear-mounted cable management.

“That’s why we calibrated every projector… to reach an out-of-the-box delta E of less than two in sRGB mode, criteria generally reserved for professional desktop monitors,” according to Asus. This projector is listed as the world’s first Calman Verified projector with 98 percent sRGB coverage due to its accurate color rendering.

Wireless mirroring for Windows 10, Android, and iOS devices is another unique feature of the monitor, making it easy to show off your portfolio from whichever device you have on hand.

Asus continued, “At our core, we are innovators who take delight in bringing our greatest ideas to reality.”

The business also unveiled a new mouse for creators that features an inbuilt dial that makes it simple to alter settings in popular Adobe apps. The business claims that, unlike utilizing sliders with a keyboard shortcut and mouse scroll, the dial allows you to keep your eyes on your project while making modifications, eliminating the need to continuously glancing at the slider bars on the screen.

The ProArt mouse also has a huge programmable third button in the center, as well as Omron switches that are long-lasting. The sensor has a resolution of 4200 DPI and a polling rate of 1000Hz. According to the manufacturer, the mouse’s rechargeable battery lasts 150 days on a full charge and may be extended to eight hours of light intermittent use with a quick charge of 60 seconds.

The mouse is meant to function on a number of surfaces, including glass, but Asus is also releasing new ProArt mousepads with a magnetic leather strip at the top that can be used to hold small items like paperclips, the Asus digital stylus, or even your AirPods.