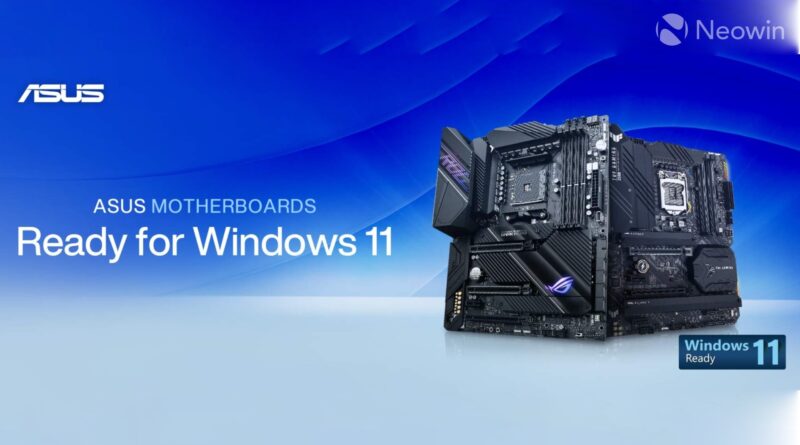 Asus is preparing a number of motherboards for Windows 11. BIOS updates have been issued for a range of chipsets, including those that support Intel Kaby Lake processors from 2017. Both Intel and AMD chipsets are supported, and the latest BIOS updates will enable TPM (Trusted Platform Module) on AMD and Intel systems automatically.

A TPM is a Windows 11 minimum requirement, and it’s a move that’s caused some confusion after users discovered their PCs didn’t have the option activated in the BIOS, or it was mislabeled in BIOS settings as “PTT” or “PSP fTPM.” Microsoft’s Windows 11 upgrade checker didn’t help clear things up at first, so it’s encouraging to see big manufacturers like Asus now enable TPM by default so users don’t have to look for it.

While Asus intends to support a wide range of motherboards with Windows 11, not all BIOS updates are currently available. A full list of Asus motherboards that are compatible with Windows 11 has been discovered by Neowin, so you should check to see if an upgrade is available for your machine.

When you go to Start > Run > msinfo32 in Windows 10, you should be able to see the model number stated if you bought a pre-built PC and aren’t sure what motherboard is inside.

Asus isn’t alone in offering Windows 11 support on its motherboards. Lists of compatible systems for Windows 11 have been issued by Gigabyte, Asrock, Biostar, and MSI. It’s still unclear when Windows 11 will be accessible to Windows 10 customers as a free upgrade. Microsoft has only stated that the holiday is in October, but the software giant has hinted at a delivery date in October.