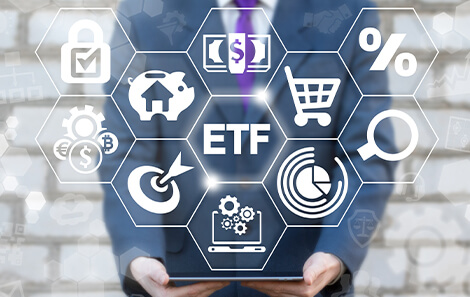 ETFs: News moves the crypto market, as it does every other financial market. Any news, from Elon Musk’s dog Floki to inflation fears and China’s prohibition on crypto market operations, has historically resulted in either a bull run or a market downturn.

Let’s take a look at what happened, how we can best position ourselves, and what to expect in the future.

Since 2017, multiple attempts have been made to register a Bitcoin exchange, putting an end to claims that Bitcoin is a speculative asset. The Winklevoss twins’ bid, which was rejected in 2018, is the most well-known of these.

The ETF’s goal is to make Bitcoin more accessible to those who are used to traditional investment. It’s a way to provide people exposure to Bitcoin without actually giving them Bitcoin. As a result, in addition to buying Bitcoin on well-known cryptocurrency exchanges like Binance and Redot, investors may buy Bitcoin in the same manner they buy stock on the New York Stock Exchange.

The Securities and Exchange Commission rejected proposals for a Bitcoin ETF due to unpredictable volatility and some security concerns. Still, given the increasing pressure from multiple sectors, as well as the broad enthusiasm for and criticism of the cryptocurrency market, it only seems reasonable to enable cryptocurrency trading in traditional investment areas.

Volatility has been a defining theme in the cryptocurrency space this year, despite being a typical occurrence. New ‘Ethereum eaters’ like Solana ($SOL) and Harmony ($ONE) rallied to deliver returns that could only be envisaged, industries are seeing tokens with use cases for their widespread problems, and, of course, China and the restriction on crypto mining activities are not to be overlooked. All of this has influenced the coin market’s market capitalization, and if there’s one lesson to be learned, it’s that patience is a virtue.

Bitcoin remains the market leader, with a market capitalization over three times that of Ethereum, which comes in second. Other tokens, such as the KuCoin governance token, Binance Coin, Cardano, and even the meme coin Doge, have surged, bringing the total cryptocurrency market capitalization over $2.5 trillion. The last time the market reached this level was in May, when it reached $2.4 trillion before falling to nearly half that amount ($1.3 trillion).

Should we expect a correction?

Crypto bears are expecting a pullback for a variety of reasons. Some were true, while others seemed far-fetched. The circumstances behind the $2.5 trillion rally are unique. The first time it reached that level, it was due to reports that Elon Musk’s Tesla will accept Bitcoin as a form of payment for its vehicles, which prompted some significant institutional buying.

Another reason was his unwavering support for Dogecoin, which caused many to proclaim it as the currency of Mars, as well as the occasional mention of his dog, Floki. In retrospect, we might have termed the Market an Elon Musk market without being incorrect. There was a lot of speculation about which other companies would allow users to acquire cryptocurrency in order to purchase their items.

In a surprising turn of events, he announced that Tesla would no longer accept bitcoin payments due to environmental concerns, but would reconsider if Bitcoin miners could move 50% of their mining to sustainable energy. China put a ban on crypto activity shortly after. At first glance, it appeared to be the usual cliche bans China has issued, but the announcement of a ban on crypto mining activities as a follow-up ban surprised many crypto bulls, indicating that China may be serious about it after all.

This time, the circumstances underlying the $2.5 trillion run are different. While some may link it to cryptocurrency’s annual bull run, the adoption of the Bitcoin ETF is undeniably a big driver. Now that it is clear that the US has no intention of prohibiting cryptocurrency activities, mining operations are shifting to Texas, where there are numerous alternative energy sources, and the dollar, which is under intense inflation scrutiny, is gradually losing its luster in favor of hedged assets such as gold and Bitcoin.

All of these factors are outside the control of one person, and if Bitcoin is to rally to the $1.5 trillion thresholds, then all of these events must deteriorate, or something worse may occur.

Three things to watch out for

1 The present Bitcoin ETF may not be what investors had hoped for. The Securities and Exchange Commission approved a Bitcoin exchange-traded fund as long as it monitors Bitcoin futures rather than the spot market. As a result, investors are forecasting price movements rather than holding bitcoins. Other ETFs are expected to be approved in the following months, and Bitcoin would not be the first cryptocurrency to have an ETF. Ethereum is our best bet for the next cryptocurrency to be turned into an ETF, but we’ve been caught off guard more times than we can count.

3 Other countries will undoubtedly follow the United States’ lead in adding Bitcoin to their list of authorized assets in order to avoid falling behind. Although some fear that cryptocurrencies would erode governments’ control over their economies, research suggests that they will only increase openness and immutability.