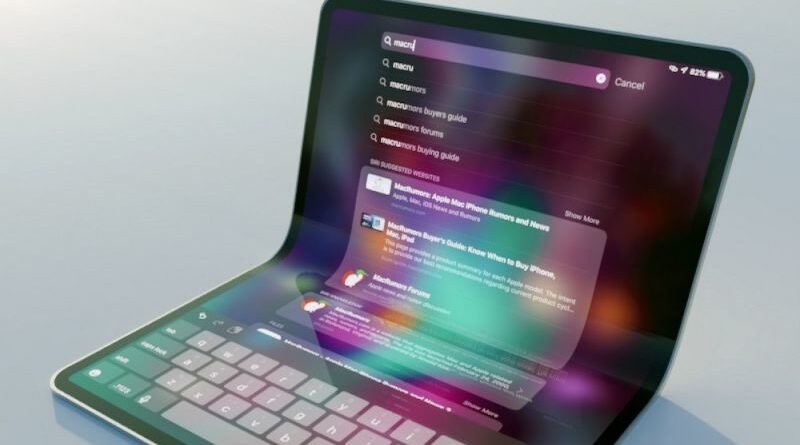 Despite delays in the creation of its foldable iPhone, Apple is said to be working on a “foldable MacBook” with a gigantic 20-inch display, according to a recent claim.

The assertion comes from Display Supply Chain Consultants (DSCC) analyst Ross Young, who has been correct on a number of occasions about future Apple products. If the rumors are true, Apple may be considering adding “a new product category” of foldable laptops to its range.

According to Young, the product could serve as both a “notebook with a full-size, on-screen keyboard when folded” and a “monitor when unfolded and utilized with an external keyboard.” Apple is rumored to be exploring screen resolutions of at least 4K, with greater options probable, in addition to the 20-inch panel size.

While there is no word on what kind of branding the Apple foldable notebook will have, several sources have linked it to the MacBook series because of the size of its display, which is larger than the iPad or other foldables on the market.

However, if Apple were to introduce a new product category with its foldable notebook, it is possible the company could reveal new branding as well.

Apple’s tablet would not be the first of its kind to be huge and foldable. The Zenbook 17 Fold, the first 17-inch foldable Windows tablet, will be released later this year by Asus. The Galaxy Flex Note was also previewed at CES earlier this year by Samsung, the current leader in mobile gadgets with foldable screens.

A 20-inch screen, on the other hand, would be a first, and Young feels Apple’s desire to broaden foldables possibilities in this way is “excellent news” for the market.

According to the analyst, Apple is not in any hurry to create a foldable of any kind, with a possible debut date of 2026 or 2027 for the folding notebook.

Ming-Chi Kuo, another well-known Apple supply chain analyst, predicts that when the foldable iPhone is unveiled, it might sell up to 20 million units. Perhaps the period between now and a possible launch will pique interest in the folding notebook in the same way.

3 thoughts on “Just In: Apple is developing a foldable MacBook with a 20-inch screen”