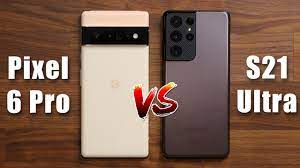 Google appears to be bored of being known for manufacturing just midrange phones with excellent cameras. At least, that’s the impression left by the Pixel 6 Pro, a flagship smartphone that takes everything excellent about prior Pixels and combines it with a slew of premium features. The Google Tensor processor, a huge 5,003mAh battery, a new triple-lens rear camera arrangement, and an astonishingly vivid 6.71-inch AMOLED display are just a few of the highlights.

The Pixel 6 Pro is a competitive smartphone when combined with the same fantastic software experience. Of course, it has competitors, with the Samsung Galaxy S21 Ultra being the most prominent Android competition. This flagship phone outperforms its predecessors in numerous crucial aspects, including a fresh new design, a stunning display, and a powerful camera.

READ ALSO: Summary Of The 8 Biggest Announcements Made At Apple’s Event

Few of us can afford to buy more than one current-generation phone at the same time, so who will win when the Google Pixel 6 Pro and the Samsung Galaxy S21 Ultra face off? We address this question by contrasting the two phones’ specifications, as well as their designs, screens, performance, cameras, and software.

Both the Samsung Galaxy S21 Ultra and Google Pixel 6 Pro, in comparison to the aesthetically conservative iPhone 13 Pro, are remarkable with bold new design tastes. The Samsung Galaxy S21 Ultra has a nearly bezel-less and uninterrupted edge-to-edge display, as well as a new rear camera module and a subtle punch-hole selfie camera at top center. With four camera lenses, this slopes gently into the phone’s top-left shoulder, giving the phone a more balanced appearance than it deserves.

The Pixel 6 Pro is also stylish and innovative. The gleaming glass back, which replaces the previous Pixel’s plastic back, includes a horizontal camera bar. This not only stands out, but it also blends in well with the rest of the phone, with the Pixel’s multitoned color scheme adding to its stylishness.

One notable design change is that the S21 Ultra is somewhat heavier (by more than half an ounce) and slightly taller than the Pixel. Given that both phones are huge, Samsung’s added mass may make it more unpleasant to handle for long periods of time.

The Galaxy S21 Ultra’s display is a large 6.8-inch Dynamic AMOLED screen with a resolution of 3200 x 1440 pixels. This gives you 515 pixels per inch, which, when combined with a 120Hz refresh rate, looks fantastic. Fortunately for Google lovers, the Pixel 6 Pro comes close to matching its opulence, with a 6.71-inch AMOLED display and a 120Hz refresh rate. At the same time, with a resolution of 3120 x 1440 pixels, it provides 512 pixels per inch, matching Samsung’s degree of detail and color.

Both phones have an official IP68 rating, which means they can withstand submersion in water for up to 30 minutes at a depth of 1.5 meters. This initial round is a tie, thanks to the equally creative designs and fascinating displays.

The Qualcomm Snapdragon 888, which uses a 5nm manufacturing technique for its transistor, is included in the Galaxy S21 Ultra. This enables it to pack more transistors into the same amount of space, allowing it to run faster than earlier generations of chips. This is also true of the Pixel 6 Pro, which features a Google-designed Tensor chip with 5nm transistors, making it substantially faster than prior Google products. Furthermore, both phones include a whopping 12GB of RAM, ensuring that they can handle the latest games and apps at the same time.

In terms of internal storage, these phones are practically comparable. They both start with 128GB of RAM and can be upgraded to 256GB and 512GB for an additional fee. Both lack a microSD card port, so data management is a necessity if you go for entry-level devices.

When it comes to the battery, the Pixel 6 Pro appears to have been built to complement the S21 Ultra. The Samsung gadget has a 5,000mAh battery, whereas the Pixel has a 5,0003mAh battery. Although our assessment of the S21 Ultra found that it may survive for two days without recharging if you’re a light user, this isn’t a significant difference in terms of size. The Pixel 6 Pro, on the other hand, can’t quite make it to the second day, at least according to our hands-on tests.

We haven’t given the Pixel a complete review yet, so we’re going to hold off on reaching a definitive decision on this one. As a result, this round is a stalemate, with both gadgets delivering nearly identical results.

Pixels have long been known for being excellent camera phones with modest specifications, so it’s a pleasant surprise to see the Pixel 6 Pro go all out this time. A 50-megapixel wide lens, a 12-megapixel ultrawide lens, and a 48-megapixel telephoto lens with 4x optical zoom make up the triple-lens rear system. Optical image stabilization is present on both the wide and telephoto lenses and the continuous presence of Google’s highly adept software results in some truly outstanding shooting. Indeed, images appear to be deliciously genuine and bright without being oversaturated or overblown, and the enlarged size of the main wide lens produces some stunning bokeh effects.

If you only looked at the main features of each phone’s camera, you’d conclude they were roughly comparable. However, the Pixel 6 Pro wins this round because it uses some unique software features, such as the Magic Eraser and Action Pan mode, to make it more versatile and enjoyable to use.

The Pixel 6 Pro runs Android 12, the most recent and most advanced version of Google’s operating system. It boasts a new design, a new notification shade, compatibility for digital car keys, and a slew of incredibly fun (and useful) camera features. The Galaxy S21 Ultra, on the other hand, runs Samsung’s One UI 3.1 skin for Android 11. This provides a condensed version of the basic Android template, as well as a commendably high amount of customization, making it an excellent all-arounder.

5G is supported by both the Pixel 6 Pro and the Galaxy S21 Ultra. This includes both the basic sub-6Hz frequency range and the speedier mmWave band, and both devices are supported by all major carriers on this front, so no matter who you choose, you should be able to get the fastest download rates.

The Pixel 6 Pro, as mentioned above, adds a slew of new software-based unique capabilities. Magic Eraser enables you Photoshop-style erase items from photos, Motion Mode helps you add movement to photos in a variety of ways, and Wait Times and Direct My Call make dialing toll-free numbers and navigating automated menus easier and faster.

The S21 Ultra also adds a new feature to the Galaxy S lineup: it supports the S Pen for the first time on a Galaxy S phone, allowing you to draw, sketch, and take notes with it. However, it lacks a stylus slot (as seen on the Note 20 Ultra), as well as some of the more advanced compatible features, such as the Camera app’s Bluetooth-enabled remote shutter control. You will, of course, have to pay extra for a S Pen.

The Google Pixel 6 Pro starts at $899 and goes up to $1,099 for the 512GB model. It will be widely available elsewhere and supported by all major networks and maybe acquired directly from Google.

While they may be comparable in some ways, the Pixel 6 Pro outperforms the Samsung Galaxy S21 Ultra overall. Google’s software wizardry enhances the camera’s versatility and enjoyment of use, while also making software updates more accessible. Furthermore, it matches Samsung’s performance and has the same appealing appearance and brilliant display.