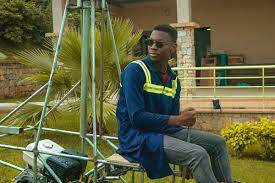 HELICOPTER: Life is a lot easier now than it was a few decades ago, thanks to modern technologies and techniques. Every day, new, effective, safe, and simple solutions to complete activities are discovered and shared with the rest of the world. With the world today whirling around the axis of technology and science, brilliant minds from all professions are using their abilities to improve the quality of life for everyone. 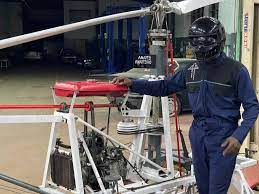 Nii is an Ashesi University mechanical engineering student, a school noted for producing high-achieving graduates. Nii began spending more time in the school’s Engineering Workshop once the idea was born, often trying his hands on new machinery to hone his fabrication talents. The first prototype was constructed just a few days after the company was founded.

READ ALSO: Just In: Solar companies in Ghana in trouble due to unfair solar policies

This original prototype had a number of flaws; several pieces were either too weak or too heavy, and some dimensions were incorrect and needed to be adjusted. However, the most essential aspect of this was that a physical representation of the concept was established, which was critical in the development of improvements.

Nii uploaded some images with the following caption on LinkedIn after sharing the news of his first successful testing after four years of research, work, and dedication:

“…After four prototypes, I started the fifth ‘Mark V’ prototype from the ground up three months ago. Previous attempts taught me how not to approach the design of this version. After several near-misses with my fingertips, the outcomes from this version exceeded my expectations! All of the systems worked flawlessly, and the experiment was a success from an anthropometric standpoint. I felt like I was finally making progress, which fueled me even more. My defective engine, my heavy rotor blades, and the fact that my airframe was composed of steel rather than aluminum were the only drawbacks to this version.

I completed my first round of tests over the weekend of September 11th. Anti-torque pedal control and cyclic were both satisfactory. The freewheeling unit effectively engaged and disengaged. The tail rotor transmission was able to maintain the correct RPM and withstand the high centrifugal force. Except for some vibrations induced by the cantilever construction, everything functioned fine. Because of its weight, the engine also struggled to get the primary rotors to the correct RPM range to provide enough lift…”

Nii, whose 22nd birthday fell on the day before his test flight, went on to thank God for providing him ideas, his family, the Ashesi D:Lab, his friends, and the Mech Haven students who would occasionally pass through his workshop to help out.

Nii attended Achimota School, where he majored in Science. He has always had a strong interest in mechanics and robotics.