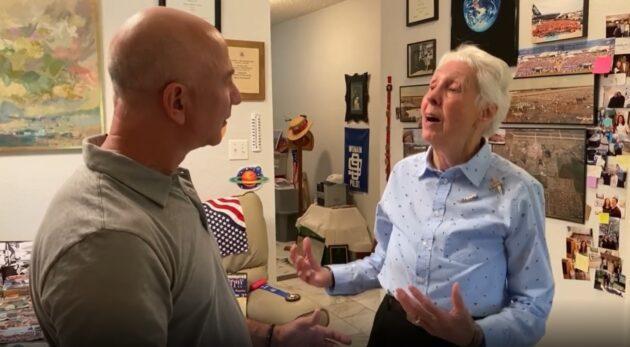 Wally Funk, one of the “Mercury 13” pilots who battled to allow women into NASA’s early astronaut program, will join Jeff Bezos on his space company’s first crewed voyage out of the atmosphere later this month, the billionaire revealed on Instagram Thursday.

The crew for New Shepard’s first voyage transporting humans on July 20th will now consist of four people: Bezos, his brother Mark, and an unnamed passenger who spent $28 million in an auction last month for their trip to space. Bezos’ attendance on the first flight is interpreted as a vote of confidence in the safety of New Shepard.

The addition of Funk as an “honored guest” is the latest symbolic gesture by Blue Origin to launch its space tourism program – the date of the first US Moon landing is July 20th, and the New Shepard capsule is named after Alan Shepard, the first American astronaut.

READ ALSO: What We Expect from Apple’s September 12 Event

“As part of the ‘Mercury 13′ Woman in Space Program in 1961, Wally Funk was at the top of her class,” Bezos wrote on Instagram. “Despite their completion of training, the program was canceled, and none of the thirteen were able to fly.”

“It’s now or never. Wally, welcome to the team. We’re looking forward to having you fly with us as our honored guest on July 20th.”

Funk, 82, was a legendary aviator in the mid-twentieth century and one of 13 women to graduate from the privately funded Women in Space Program, where she underwent rigorous astronaut training but was never able to travel to space. Funk applied three times to NASA’s astronaut program after it became open to women in 1976, but each time she was turned down.

SpaceShipTwo, like New Shepard, goes to the boundary of space at a height of around 62 miles, the widely acknowledged space milestone.