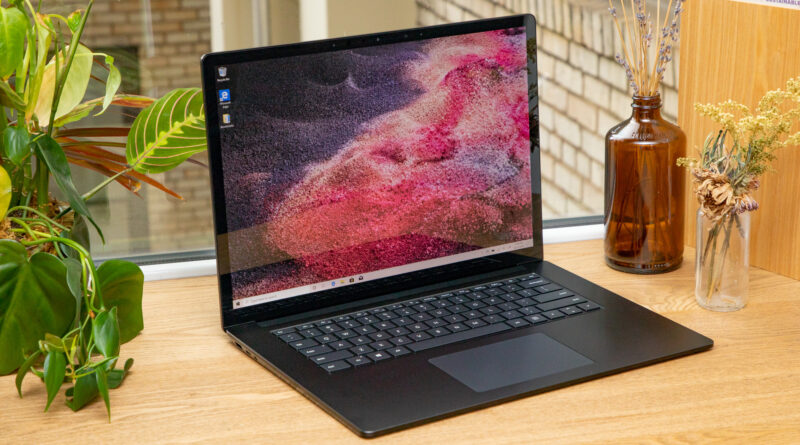 Microsoft’s newest business laptop, the New Surface Laptop 3, has just been unveiled. Wi-Fi 6 (802.11ax) is included, as is Bluetooth 5.0, as well as a USB Type-C port. It is powered by the latest 10th generation Intel Core processors. It’s a follow-up to the Surface Laptop 2 from last year.

Incredible attention to detail went into the design of the Surface Laptop 3. The deck is made of Alcantara, but there is also a model with an aluminium deck available.

Alcantara fabric on the deck, which houses the keyboard, also makes a significant design difference.

Additionally, when the Microsoft Surface Laptop 3 is opened, the bezels on both sides, top and bottom are noticeably smaller than before.

Similar to the deck, the keyboard and trackpad are located on the bottom. The keyboard’s large, bold, and sturdy keys make it suitable for both casual and professional use

There are fewer ports on this laptop than on the model from last year, but it has been upgraded in other ways.

There is no Mini DisplayPort or USB Type-A port, so you must thank the Surface Connect connector for access to the additional ports.

The Surface Laptop 3 offers two screen sizes, just like its predecessor. The 13.5-inch and 15-inch models are included.

Its PixelSense display is named for its capacitive touch and stylus capabilities, just like on the laptop. Touch and pen input are supported on this display.

In addition, this laptop has a 10-point touch tracking system, which means that the screens can handle simultaneous touches from all fingers on both hands, allowing for a wide range of gestures and multi-touch controls.

Interior components include Intel’s 10th Gen Ice Lake quad-core processors, either in Core i5 or Core i7 flavors, for the 13.5-inch Surface Laptop 3.

However, AMD processors are used in the 15-inch model. There are two CPU options in this model as well, just like the smaller one.

When it comes to mobile processors, AMD has two options for you: AMD RyzenTM 5 3580U and AMD RyzenTM 7 3780U, both with RadeonTM Vega 9 Graphics Microsoft Surface® Edition.

A 1TB SSD card and 16GB of RAM are both available on the Surface Laptop 3, ensuring plenty of memory and storage for most users.

For the best possible user experience, these laptops come pre-installed with the Windows 10 operating system.

On-the-fly data encryption is possible thanks to the TPM 2.0 chip in the Surface Laptop 3’s SSD controller.

These laptops also include Omnisonic Speakers. There is a Dolby Atmos sound system as well as stereo speakers with a high dynamic range.

In addition, the laptop’s battery can last for up to 11.5 hours under normal conditions.

The base price of the Surface Laptop 3 is $999.99, but the price varies depending on the configuration.

In addition to the Microsoft official store, third-party e-commerce platforms such as Amazon also stock and sell this laptop.