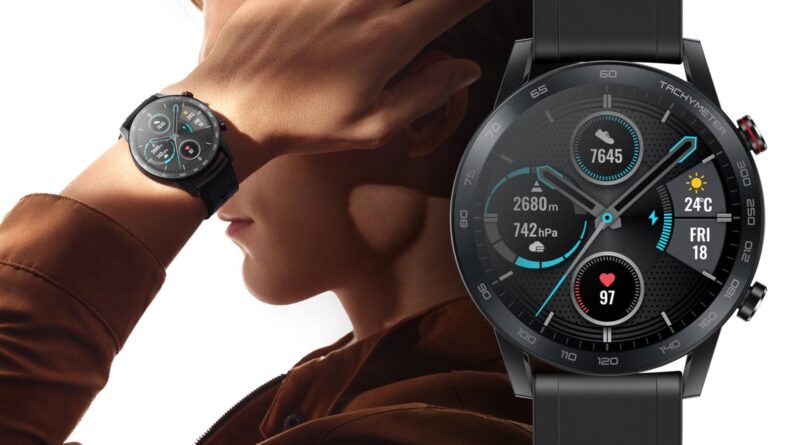 On the 42mm variant, though, things are a little different. Plane bezels are included, unlike the predecessor and the far more expensive 46mm variant. There is no way to calibrate anything here.

In search of a pleasurable experience. When deciding on a size, you have a lot to think about. Here, size matters a lot. The display size, battery capacity, and weight are all influenced by the size variant you choose.

Both variations include an 800 NIT display, which helps to ensure that the contents on the screen are viewable in natural light.

The 46mm variation, weighing 41g, has extra mass due to the larger battery packed into its larger battery. The Huawei Magic 2 42mm model weights roughly 29g.

The Huawei Magic Watch 2 is made up of a stainless steel frame, ceramics on the back, and glass on the front.

The hardware specifications of the Huawei Magic Watch 2 aren’t as impressive as those of the Apple Watch 4, therefore there’s not much to say about them.

The Huawei Magic Watch 2, on the other hand, has a dual-core Kirin A1 CPU, 4GB of internal memory, and no micro-SD card slot.

The battery capacity of the Honor Magic watch 2 is governed on the watch size, as previously stated. The 46mm model features a non-removable Li-ion battery with a capacity of 455 mAh, while the 42mm model has a capacity of 215 mAh. A larger chassis allows for a larger battery to be installed.

The Huawei Magic watch 2 runs the Honor wearable platform on the software side. It requires Android 4.0 or iOS 9.0 or higher to sync.

The Honor magic watch 2 has an always-on display that allows you to get instant information on the time and date. This makes checking the time a lot easier.

Aside from being a smartphone extension, fitness-enabling capabilities are one of the most sought-after aspects by most enthusiasts. The Honor magic watch 2 has 15 different tracking modes to help you stay in shape.

The Honor Magic Watch 2 comes with a variety of tracking modes to keep track of your cycling, swimming, trail running, hiking, and other activities.

No cellular connectivity is available on the Honor Magic watch 2. It is entirely reliant on the smartphone with which it is attached.

A barometer, a heart rate monitor, a gyroscope, and Bluetooth 5.0 are all included in the Honor Magic watch 2.

Price and Availability of the Honor Magic Watch 2