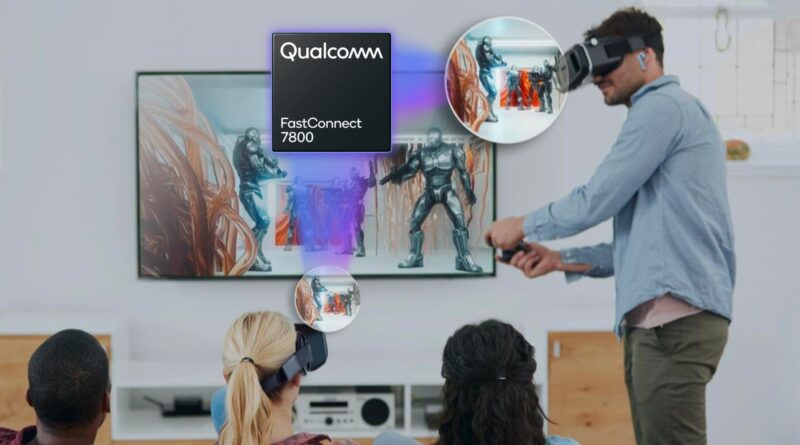 The FastConnect 7800 is a 14nm semiconductor that supports Wi-Fi 7 and Bluetooth 5.3, promising high-speed network access with low latency and wireless audio upgrades. Wi-Fi 7 uses the first two of the supported spectrums (5GHz, 6GHz, and 2.4GHz), while the latter is reserved for Bluetooth and lower-bandwidth Wi-Fi.

The FastConnect 7800 supports up to four connections over the 6GHz and 5GHz bands using High Band Simultaneous (HBS) multi-link technology and two Wi-Fi radios. The chipset uses a single 320MHz or two combined 160MHz channels in the 6GHz frequency to achieve ultra-high speeds of up to 5.8Gbps. When the 6GHz spectrum is unavailable, the network switches to the 5GHz band, resulting in a peak network speed of 4.3Gbps.

Another supported feature is 4-Stream Dual-Band Simultaneous (DBS), which allows the chipset to deliver 2ms latency for a lag-free experience.

“Qualcomm Technologies reasserts its leadership by defining the future of wireless communication with the FastConnect 7800. “Introducing the industry’s first Wi-Fi 7 solution may be enough for some, but with the introduction of HBS Multi-Link, we take performance to the next level, shattering expectations for speed and latency,” said Dino Bekis, Qualcomm Technologies’ vice president and general manager of Mobile Compute and Connectivity.

With the FastConnect 7800, you’ll notice some noticeable improvements in audio quality. Dual Bluetooth technology with LE Audio and Snapdragon Sound is supported by the processor, allowing it to wirelessly deliver 16-bit or 24-bit high-resolution lossless audio. The twin Bluetooth radios also provide a number of benefits.

Connected devices would have up to twice the range and connect up to 50 percent faster, all while consuming half the power.

In addition to Wi-Fi 7, the FastConnect 7800 also supports Wi-Fi 6 or 6E. Despite the fact that Wi-Fi 7 is projected to be completely developed and available on a wide range of devices by 2024, Qualcomm claims that their solution will be commercially available in the second half of this year. It’s possible that it’ll make its debut in Qualcomm’s future top smartphone SoC, the Snapdragon 8 Gen 2.