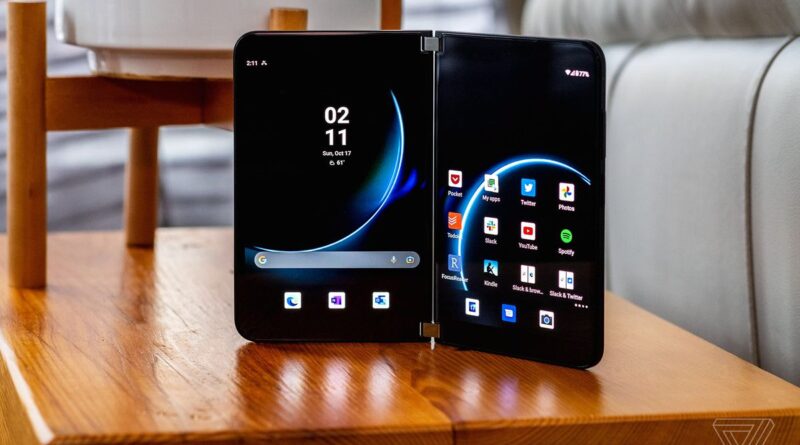 Surface Duo 2 is Microsoft’s second attempt at becoming a household name in the foldable-tablet world with the Microsoft Surface Duo 2. In comparison to the first-generation Surface Duo, we now have a better display, a better performance setup, and more. The real question here is whether or not the Surface 2’s improvements are sufficient to keep it relevant in its class.

Because Microsoft kept an AMOLED panel on the screen, this is a positive development. The overall unfolded display now measures 5.8 inches, up from the previous model’s smaller 5.6-inch screen. This is due to the increased overall display size.

The displays are now curved at the edges, which is aesthetically pleasing to some degree. It was made possible by the curved edges of this device that made it possible for users to check notifications from the side of the device when it was closed.

Because the tablet is designed to be closed, Microsoft did not include an external display like the Samsung Galaxy Fold Z Fold 3 5G and the Xiaomi Mi Mix fold.

It would have been nice if the device had an external display, as it would have saved us the trouble of having to unfold it for small tasks. The Microsoft Surface Duo 2 isn’t a hybrid after all, and it’s best described as a foldable tablet.

During folding, the tablet has a camera bump that wasn’t present on the first version. Three cameras are housed within this camera bump. In addition, there is an LED flash nearby.

It’s clear that Microsoft put a lot of effort into making the Surface Duo 2’s camera hardware more conventional when compared to the first-generation Surface.

If you look at the improvements, the most notable one is the addition of separate rear and selfie cameras, rather than just the single selfie-camera-folded-in-half.

With a 12MP primary camera with an F/1.7 aperture, we also have an F/2.4 12-megapixel telephoto camera and an F/2.2 16-megapixel ultrawide camera on the back. This setup is capable of recording videos in 4K resolution at a frame rate of 60 frames per second.

A single 12MP selfie camera with an f/2.0 aperture is in charge of the selfies. This camera can record videos at a resolution of 1080p at 30 frames per second.

Next, let’s talk about what’s in the performance configuration. The Microsoft Surface Duo 2’s hardware matched 2021 specifications, unlike the first-generation release.

At the heart of the device is a powerful Qualcomm 888 5G Octa-core processor with eight cores and an Adreno 640 graphics processor. A 4449mAh Li-Po battery is also available. We also have a fast-charging mechanism of 23W available.

Android 11 is the operating system that runs on top of the smartphone.

The first-generation Surface’s multitasking features are still present in this version. As a result, the tab’s various divisions can each run a different set of tasks. Play your game on one screen while using the other to control it. This is possible.

In addition to the Type-c port, the Microsoft Surface Duo 2 has low-energy Bluetooth 5.1, NFC, and WiFi / Hotspot capabilities.

The Microsoft Surface Duo 2’s internet connectivity is limited to 5G, which means that enthusiasts can take advantage of 5G connectivity.