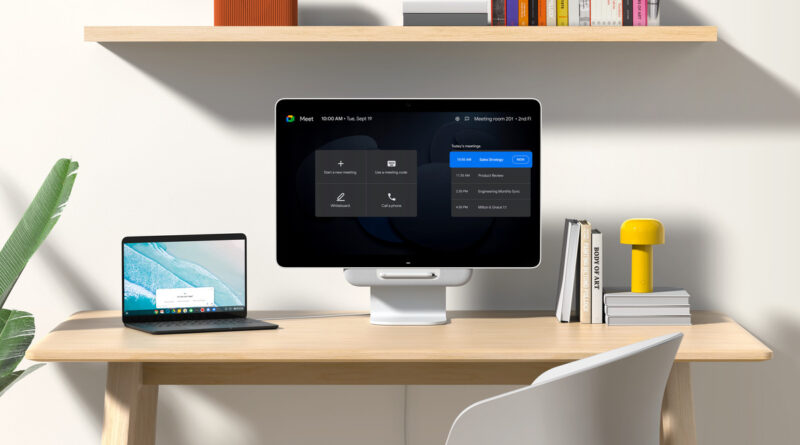 Google has shown two new hardware devices that are designed to operate with Google Meet and look like Google gear. The Series One Desk 27 and Series One Board 65 are both created by Avocor, but they’re part of the Series One initiative, which gives Google special permission to build Meet-specific products. In addition to a normal Intel Core i5, they incorporate a bespoke Google Edge TPU chip.

The Series One Desk 27 is a 27-inch display with unique speakers, mics, a camera, and a touchscreen, as its name suggests. The Desk 27 may be used as a laptop monitor in addition to being a separate video conferencing device. It has a USB-C port on the back, and when you dock it, you can use the laptop’s AV array for video calls and charge it with 45W USB-C PD.

All of this sounds like a work-from-home dream come true, but these aren’t consumer-oriented equipment. Instead, Google envisions them attached to the walls of tiny conference rooms or sitting on open office tables. Even the 27-inch variant, at $1,999, is not inexpensive, as is the case with most enterprise-focused technology.

Unlike most enterprise-focused hardware, the Series One Desk 27 looks and feels like it belongs in Google’s current hardware lineup. The contours have been flattened, and the bottom soundbar is covered in fabric that would look good next to a Google Home Mini.

The Desk 27 can’t be used as a regular all-in-one computer, despite using Chrome OS to power its standalone Google Meet capabilities. However, compared to a conventional laptop, there is a lot of excellent videoconferencing technology packed in.

The 5-megapixel camera has a 100-degree field of vision, a privacy shutter, and can zoom and pan to keep items in focus. The TPU and Google’s AI are used in eight microphones to eliminate ambient noise.

The touchscreen display can also be utilized as a whiteboard when paired with the accompanying stylus. It’s a 1440p, 16:9 display that automatically adjusts color and brightness based on ambient illumination.

Along with the hardware announcements, Google Workspace also announced a partnership with Cisco, which should allow devices intended for Meet or Webex to work together. As a result, the Series One Desk 27 will be able to participate in Webex calls, and Webex-specific hardware should be able to participate in Google Meet. There’s not much to say about Zoom except for the USB-C port next to the device’s ethernet and HDMI-out ports, which turns the Desk 27 into an external monitor.

It’s too pricey for customers, even with its dedicated speakers, microphones, and camera. However, for companies that have implemented Google Meet across the board, it may be worth a look.

The Series One Desk 27 is expected to be released later this year, with the larger Series One Board following next year.