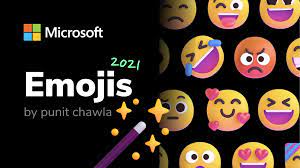 NEW EMOJI: This week, Microsoft will make its Fluent-style emoji available on Windows 11. The OS is getting a new optional update that includes a number of key bug fixes as well as the new emoji Microsoft teased earlier this year.

While it’s a completely new aesthetic, it’s not the 3D look that Microsoft had originally promised; instead, the corporation went with 2D.

Clippy makes a comeback in Windows 11, as Microsoft has replaced the conventional paperclip emoji with its Clippy icon. The emoji have also been changed to incorporate brighter, more vivid colors, but without the 3D effects that formerly made them stand out.

In a minor update to its design blog from July, Microsoft reveals, “The new emoji style is exclusively accessible in Windows 11 and is 2D.” “We continue to provide a variety of emojis [sic] for Windows 10 users.” Microsoft “decided for 3D designs over 2D and chose to animate the majority of our emoji,” according to the same blog post.

READ ALSO:With Windows 11 You Can Now share Your Screen In Microsoft Teams And Other Video Calls

It’s unclear whether the stunning 3D emoji that Microsoft showcased earlier this year would be included in Windows 11. The lack of 3D may be due to technical constraints in Microsoft’s color font format, which is used to display emoji in Windows. While Apple utilizes bitmaps to render their emoji, Microsoft uses a vector format that is far more scalable and can save space if the emoji are flatter.

We’re still expecting 3D and animated versions of these Fluent emoji to come in Microsoft Teams, but you’ll need to switch to Windows 11 to get the new emoji in Windows. Microsoft has stated that it will not be adding this new emoji to Windows 10.