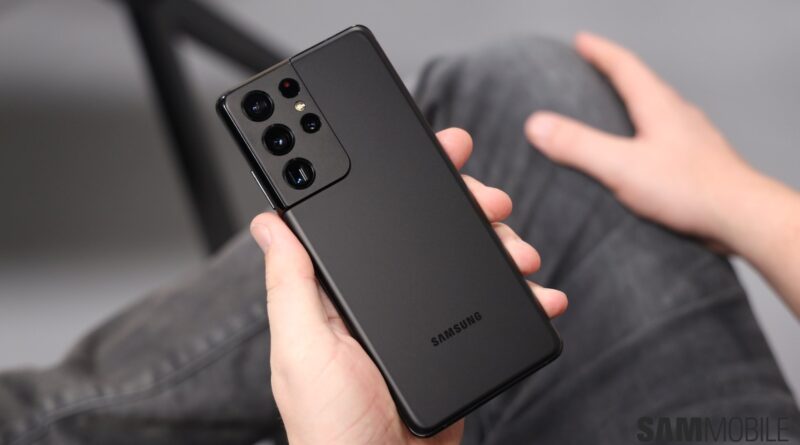 The Samsung Galaxy S21 Ultra 5G replaces the Galaxy S20 Ultra as the S series’ most powerful smartphone. It offers a package that caters to customers who are dissatisfied with the Galaxy S21 and Galaxy S21 Plus’s other features. We have the largest display, the most RAM, the most storage, the largest battery, a superior camera, S-Pen compatibility, and much more when compared to its less costly siblings.

The design of the Samsung Galaxy S21 Ultra 5G is unique. When compared to its less expensive brothers, the Ultra appears to be on a higher pedestal. With its metal frame and Corning Gorilla Glass Victus on the front and rear, the aesthetics and build parameters say it all.

On the back, there’s a camera bump with four cameras positioned in a way that looks like a Frankenstein design. It’s the kind of design that will appeal to photographers. In the camera module, you’ll also discover an LED flash.

Starting with the front, we have a gigantic 6.8-inch Dynamic AMOLED display, which is the largest in the S21 series. When comparing this display to the S20 ultra’s, it’s clear that Samsung has lowered an inch, which I think is a good thing. Despite the fact that many individuals demand huge displays, some people find operating them stressful.

This display has a resolution of 1440 x 3200 pixels, a density of 515 pixels per inch, and a refresh rate of 120 frames per second. It also has the top of the line logo on it. Victus Corning Gorilla Glass

This year, Samsung debuted the S-Pen to the S series. The S-PEN, on the other hand, is only supported on the Galaxy S20 Ultra 5G, which is the top of the line.

The S-Pen mechanism on the Note 20 and Note 20 Ultra is more durable than the one on this device. It’s just a program that allows you to make notes and perform a few other tasks; however, the recent remote function is missing.

READ ALSO:How to download WatchOS 8 to your Apple Watch

Furthermore, the Samsung Galaxy S21 Ultra lacks a compartment for storing the PEN when not in use, necessitating the purchase of a specific case from Samsung. Please keep in mind that the S-Pen is not included in the box. It’s a choice.

No Charger, No Headphones in the Box

It turns out that Apple’s bold decision to leave headphones and chargers out of smartphone boxes has started to become a trend. The Mi 11’s rapid popularity is a sign of things to come.

Samsung has followed suit, and the Samsung Galaxy S21 Ultra 5G, like its brothers in the series, will not include headphones or charging cables, which is a turnoff for me given the hefty cost of purchasing such a high-end handset.

The Samsung Galaxy S21 Ultra 5G’s cameras are without a doubt the most powerful in the series. Unlike last year, when the less expensive Galaxy S20 and S20 Plus shared a lot of camera DNA with the top-of-the-line S20 Ultra, the S21 Ultra and the less expensive alternatives have a significant gap.

For begin, instead of the triple camera system found on its less expensive brothers, we have a quad-camera system on the back.

A 12MP ultrawide camera with an aperture of f/2.2 and dual-pixel PDAF completes the quad-camera system. This rear camera system can record films in ultra HD resolutions of 8K@24fps, 4K@30/60fps, 1080p@30/60/240fps, 720p@960fps, HDR10+, stereo sound, and gyro-EIS. Visit the specifications sheet to learn more about the different video recording modes.

Moving upfront, we have a single 40MP camera with an aperture of f/2.2. Video record on this camera is capped at 4k @ 60fps.

On the software side, we have One UI 3.1 user interface running on the Android 11 operating system.

Internet connectivity here is capped at 5G as the smartphone supports 5G networks.

The smartphone was announced on January 14th, 2021, and is expected to be available for purchase from the 29th of January 2021.