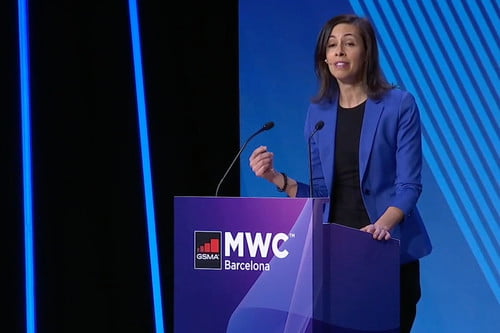 This year’s Mobile World Congress (MWC) has come to an end, and we can already tell that next year will be an exciting year for new mobile technology.

Not surprisingly, 5G technology took center stage at the event, with new 5G consumer products such as smartphones and internet-of-things (IoT) devices to ground-breaking new commercial solutions that will help drive 5G adoption to new heights.

Despite the fact that new smartphone announcements were a big part of MWC this year, they didn’t dominate the event as much as they have in the past. Instead, the promise of 5G has companies looking for new ways to keep us connected in ways we haven’t been before — beyond the smartphones in our pockets.

This includes not only the obvious players, such as cool new 5G-capable laptops and tablets, but also the powering of wearables such as assisted reality glasses and even 5G home internet solutions.

This week, both MediaTek and Qualcomm announced their latest 5G modem chips, the Snapdragon X70 from Qualcomm and the Dimensity 8000 from MediaTek.

The Snapdragon X70 is an improvement over last year’s Snapdragon X65, which can be found in Samsung’s new Galaxy S22 lineup. Qualcomm is emphasizing intelligence rather than speed this time around. After all, the same 10Gbps peak performance should be more than adequate for what 5G networks will be capable of delivering in the coming years.

The goal today is to ensure that the chip can make the best use of whatever 5G signals are available while being gentler on your phone’s battery. As 5G networks become more complex, the Snapdragon X70 with A.I. is clearly the way forward. features on board that will assist it in optimizing antennas and reception to provide you with the best 5G signal possible, no matter where you are.

READ ALSO: You Can No Longer Buy Apple Products In Russia

The Dimensity 8000, on the other hand, is more of a workhorse chip that focuses on sub-6GHz 5G frequencies — for the time being, at least. The company’s Dimensity 5G Open Resource Architecture (DORA) program, which allows manufacturers to customize the chip for their specific needs, is its secret sauce.

Both are aimed at flagship smartphones, but as a step down from the more expensive Dimensity 9000, the new 8000 series chips could result in a few more affordable options appearing in the coming months.

With its incredible speeds and low latency, 5G has brought with it the vision of an interconnected world in which wired broadband connections and even home routers will be obsolete.

Although we are likely years away from having ubiquitous 5G connectivity for every connected device in our homes, integrating 5G into a modern wireless network is much more feasible.

In this scenario, a traditional Wi-Fi router remains at the edge of your home network, but instead of a wired cable or fiber connection, it connects to the internet using the same 5G technology found in your smartphone. Because everything in your home still connects via Wi-Fi, you don’t need every PC, laptop, game console, and IoT device to be 5G-capable. In fact, your home appliances aren’t aware of the distinction.

TCL unveiled a new router for this purpose this week, promising to deliver extremely fast internet speeds to your home without the use of wires. We’re talking about theoretical speeds of up to 4.67Gbps over sub-6GHz 5G frequencies, as well as enough horsepower to distribute those speeds to every device in your home.

With all of the hardware pieces in place, the ball is now in the hands of mobile network operators to deliver the kind of fast and widespread 5G that will make true wireless home internet a reality.

Because more companies are embracing the Open RAN initiative, 2022 appears to be the year that open 5G equipment standards finally become mainstream.

While Radio Access Networks (RANs) may appear to be dry and technical concepts, they are the foundation of modern 5G networks. You won’t get 5G without them, and if they’re expensive and difficult to install, it’ll take longer for your preferred carrier to bring faster 5G service to your neighborhood.

This is where the O-RAN Alliance enters the picture. For many years, deploying cellular networks was a time-consuming and complicated process requiring expensive proprietary equipment. Once a mobile network operator (MNO) chose a vendor, they were largely obligated to purchase the remainder of their equipment from that vendor to ensure that everything worked together.

Because of the growing demand for 5G, carriers, equipment manufacturers, and researchers realized they needed to find a better way, and thus the O-RAN Alliance was formed. It is an agreement between manufacturers to build interoperable equipment. It is abbreviated as Open RAN. This means that MNOs can take a modular approach, selecting the best equipment available to build the best networks — more cost-effectively and faster.

The shift toward open standards has also resulted in the separation of 5G equipment’s software and hardware components. Rather than embedded systems, where you’d buy a “black box” with proprietary software pre-installed, software is now a separate layer. This also means that much of the software used to manage 5G networks can now be installed on commercially available server hardware. Furthermore, it can be virtualized, allowing a single physical server to perform functions that previously would have required a slew of different hardware devices.

This year has seen an explosion of new O-RAN and virtual RAN (vRAN) products, which are already driving the 5G expansion faster than ever before.

From HPE’s 5G virtual base stations in Japan to seamless melding of Wi-Fi and 5G on private networks, it’s an exciting time for 5G connectivity.

It’s also not just about your carrier’s public 5G network. This year has already seen a massive increase in the number of private 5G networks, from university campuses to retail stores.

In most cases, 5G augments rather than replaces Wi-Fi. Companies like HPE are developing new ways to make this work seamlessly, such as networks that will allow you to roam around a campus, seamlessly switching between the organization’s private 5G and Wi-Fi networks.

Although it will be years before 5G completely replaces Wi-Fi, the two technologies complement each other very well. Although Wi-Fi is still less expensive, private 5G can provide coverage in areas and at ranges where Wi-Fi simply cannot compete.

Furthermore, the requirement to authenticate using an eSIM makes private 5G even more secure than Wi-Fi, making it a better choice for industrial and other closed networks. The demand for private 5G is also increasing at a rapid pace. According to a recent study, 5G adoption in retail stores will triple by 2024.

The telecommunications industry is also not standing still. As impressive as 5G is, experts are already anticipating the next generation of cellular technology.

Although theoretical wireless speeds of up to 1 Terabyte are possible, typical performance is expected to be in the 100Gbps range.

Most importantly, the Federal Communications Commission (FCC) is already planning ahead of time.

Even though the first 6G deployments are unlikely until closer to 2030, FCC Chairwoman Jessica Rosenworcel wants to make sure we’re prepared.

During her MWC Keynote Address, the Hon. Ms. Rosenworcel stated unequivocally that the FCC intends to learn from past mistakes and expects the rest of the industry to do the same. This entails allocating new spectrum well in advance and ensuring that everyone from the aviation industry to the Department of Defense has time to study the proposed spectrum and weigh in before the first 6G towers go up.