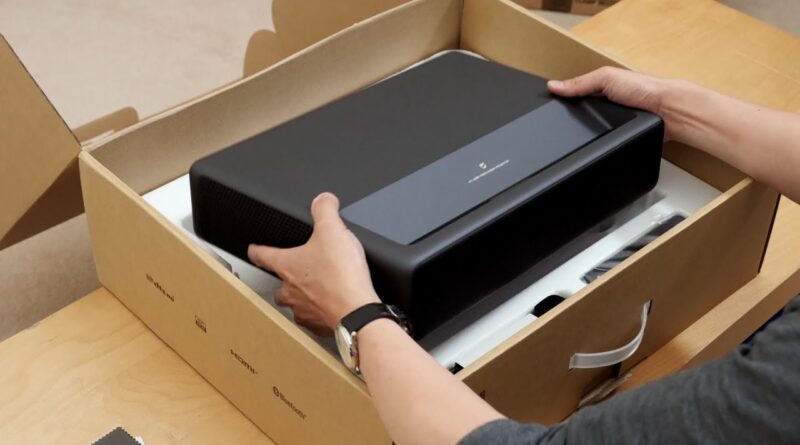 The Xiaomi Mijia Laser Projector is an ultra-short throw projector that provides dramatic home cinema viewing similar to that of a theater. It has a brightness of 2000 ANSI lumens and a 4K (3840 x 2160) pixel.

It supports dynamic image HDR10 decoding as well as ultra-short focus (using its built-in ToF sensor). A big screen of up to 80-150 inches may be displayed using this 4K projector. It also has ALPD 3.0 laser luminous display technology and XiaoAI voice control capabilities.

The Amlogic T968 Processor in the Xiaomi Mi 1S 4K Laser Projector supports up to 2GB RAM and 16GB internal storage. It also includes up to four speakers that support DTS-HD and Dolby Audio. This projector also includes a variety of interface ports and can connect to the internet via Wi-Fi 5.

The Xiaomi Mi 1S 4K Laser Projector boasts a stylish, compact form that complements any decor. This portable projector is 16.1 x 11.4 x 3.5 inches and weighs 7 kg, so it won’t take up much space but will project images to a 150-inch screen nicely.

This 4K Laser Projector has three fans for cooling, one of which is a real-time temperature control fan that operates dependent on the device’s temperature. This fan is as quiet as it gets.

This projector includes many interface connection connections on the back, including 3 HDMI ports, 1 HDMI ARC port, 2 x conventional HDMI, 1 x USB 3.0, an Audio Output, 1 x AV Input, a S/PDIF slot for high-quality sound, and an Ethernet connector for network connection.

This projector also has a brightness of 2000 ANSI Lumens, which produces soothing light and clear images even in low-light environments.

For vibrant visuals, it also supports a wide color gamut and peak brightness. It is also HDR10 compliant, allowing you to enjoy high dynamic range movies and TV shows with vibrant colors and highlights.

This projector achieved achievements in color accuracy, color gamut, and high performance thanks to the inbuilt ALPD 3.0 laser fluorescent display technology. It gives them a more genuine and youthful feel.

The Xiaomi Mijia Laser Projector 1S 4K features a minimum projected diameter of 80 inches and a maximum projection diameter of 150 inches, due to a throw ratio of only 1.1:1, which provides for greater viewing distance versatility.

This projector will provide an outstanding home cinema screen up to 150 inches when placed 12 inches away from any wall, allowing you to enjoy a large cinematic screen in almost any room.

The Amologic T968 CPU in the Xiaomi Mijia Laser Projector 1S 4K is a four-core Arm Cortex-A53 processor with a clock speed of up to 1.8 GHz. This TV chip using a 28nm production technology boosts performance while lowering power consumption.

The Arm Mali-T830MP2 GPU, an integrated graphics card, enhances the display on the chip. It also includes 2GB of RAM and 16GB of eMMC internal memory.

The 4K Projector is also compatible with Android TV, which provides access to over 400,000 movies and shows from sites such as Youtube and Netflix in one convenient location.

The PatchWall system is pre-installed on this projector, and it also supports XiaoAI voice control.

Above all, this projector offers Bluetooth 4.1 technology as well as Wi-Fi networking for wireless connectivity.

Starting at $1,177, the Xiaomi Mijia Laser Projector 1S 4K is available. It’s available through Gearbest, Banggood, AliExpress, and Amazon, among others.