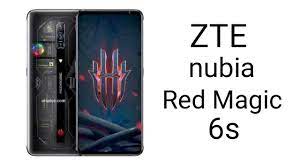 The ZTE Nubia Red Magic 6s is an improved version of the original Nubia Red Magic 6. It comes with a significantly more powerful processor as well as extra RAM. The other options are essentially the same, leaving people with few compelling reasons to buy.

Consumers who are familiar with the design of the normal Red Magic 6 will find the Nubia Red Magic 6s chassis to be unremarkable, as ZTE made no effort to re-design it.

The color selections are what can be called a design distinction, with the highlight being its apparent translucent rear covering, which isn’t an option on the former. The eclipse black color option is available on both devices.

A camera module, consisting of three cameras, is also found on the back, as expected.

READ ALSO: How to use the Apple Maps globe view in MacOS Monterey

Starting with the display, we got a 6.8-inch AMOLED panel. This display has substantial bezels on the top and bottom, which can be interpreted as an attempt to improve ergonomics for users when playing games in landscape mode.

The ZTE Nubia Red Magic 6s has the same gaming characteristics as its older brother. It has pressure-sensitive zones with 450Hz touch sensing and a sliding trigger on the rear, so you don’t have to rely on the game’s on-screen controls.

Still, we have a built-in cooling fan to lessen the heat effect, which is one of the aspects of thriving mobile gaming. For some gamer aesthetics, we also offer RGB lights.

The cameras on the ZTE Nubia Red Magic 6s are similar to those found on the regular Magic 6. The cameras in the back and front are identical.

We have the same 8MP selfie camera with an aperture of f/2.0 on the front. This camera captures films at a maximum resolution of 1080p at 30 frames per second.

The key changes between the ZTE Nubia Red Magic 6s and the normal Magic 6 are the processor and RAM, as mentioned in the introductory paragraph.

The rest of the show’s lineup hasn’t changed. The Adreno 660 GPU, a non-removable 5050 mAh Li-Po battery, and a 30W quick charge mechanism are all present.

We have the Red magic 4.5 user interface running on the Android 11 operating system on the software side.

The ZTE Nubia red magic 6s has a 3.5mm headphone jack as well as a Type-C 3.0 connector that supports OTG. Low-energy Bluetooth 5.1, NFC, and Wifi / Hotspot are also available.

Because Internet connectivity is limited to 5G, enthusiasts can use 5G for both downloads and uploads.

Price and Availability of the ZTE Nubia Red Magic 6s